Author note: Hey all, I’m back with another thread of questionable math and skill analysis, this time focusing on Electrical Burn, with a bit of Evil Enchantress later on. Anyway, I’m out of introductory buttcrap, so let’s get into it.

This thread is based on some of Adabiviak’s work, the important things to take away from this are as follows:

A little background from elsewhere:

This first graph has a lot of information in it, but hopefully I can explain it well enough so that it makes sense.

Basically, both axes refer to time, denoted in DoT ticks, however, the Y-axis only refers to the first 6, each tick of the shock DoT, while the X-axis refers to possible ticks of fire DoTs (note that the first 6 ticks of the X-axis coincide with the ticks on the Y-axis).
The first row (row 2) refers to the fire DoT that could proc from the first tick of the shock DoT, which also starts on the first tick, and it has (in this case, with 5/5 EB) a 20% proc chance, so over a large number of trials the damage it puts out is equal to 20% of the shock DoT’s damage.
Since all ticks in a given DoT effect do (almost) the same damage, it follows that the next 14 ticks will also recive 20% damage from the shock tick.
From there, the next 5 rows function the same, starting on ticks 2-6 respectively.
45

The “total” row is the composite of the damage dealt in that given tick, given by this equation:

Where:
C: the composite damage value for that tick
B: the proc chance for EB
n: the number of potential fire DoT ticks that tick

The “sum” value is simply the sum of all of the composites, and the “smpl” value is the overall equation for determining the damage modifier for a single Shock DoT:

Where:
F: the overall multiplier for fire damage from EB, assuming no other damage bonuses, if you multiply the damage from a single shock DoT tick by this number you will get the average amount of fire damage you should expect from any given shock DoT
B: the proc Chance from EB

Plotting the average overall damage and the chance for EB to proc at least once (refer to this thread for an explanation of where the true chance comes from) results in this sheet: 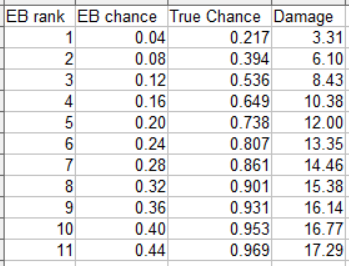 The important part of this sheet is that it illustrates that EB continues adding damage, even after the chance to proc one fire DoT is very high, and the chance per rank starts to diminish quite rapidly. I think what causes this is the chance for the second or third procs is still increasing strongly and extending the fire DoT duration.

Finally, this sheet lists the net overall modifiers based on the ranks of both Electrical Burn and Evil Enchantress. the light gray area is only accessible with an L.Catalyst COM, and the dark gray is impossible.

EE applies to both the shock and fire DoTs, and since the damage of the fire DoT is based on the shock DoT you can

This sheet can be used to compare the value of skill points for the distribution in a build.
I think it’s worth noting at this point that EB does not increase your maximum potential damage, it only shifts the average to be closer to that theoretical maximum, while EE will increase both the standard and the maximum, by the same amount.

EB does a lot more than just give you a small chance to proc a fire DoT from a shock DoT, with the right setup, it can do quite a lot of damage, especially concidering the recent fix to Wires Don’t Talk.

Slag is applied to both the fire and shock DoTs, so to see how it affects the fire damage of EB, you have to square it (same as EE)
Elemental effect damage from BAR can just be added to the EE modifier and squared as normal, however, damage type-specific Elemental effect damage (like the fire damage from the SoT COM) can only be added to the fire portion (this means you have to multiply the fire and shock modifiers, rather than just squaring)
Elemental damage (WDT or Bone of Ancients) should be multiplied in, if you have a shock bone and WDT, add the bonuses, if you have WDT and a fire bone, they act on different elements, so multiply them both in.