We are currently in the process of adapting 200+ archived forum threads to our page. You may encounter some of the subpages unedited and unformatted – please give us some time to bring you the best experience. Thank you,
Pirek and Archive team]

This is a port from the Helsabot’s “Idiot’s guide to Gibbed items”, originally posted in the old GBX Forums.

DISCLAIMER: This is a GUIDE to modded items, I do not endorse the use of save editors unless it is in your own save game and you know what you’re doing. The use of modded weapons infringes the Terms of Service of both PlayStation Network and XBOX Live Arcade and can result in a PERMANENT ban of both your console and account. You don’t want that to happen, right?. Some weapon images were made with Gibbed for informative purposes.

This is a guide about gibbed/modded/altered weapons and items for people unfamiliar with them.
I made this thread upon a request, and jumped on it immediately since a large portion of the community seems either misinformed or uneducated in the matter.
I will update it from here whenever necessary.

Keep in mind that there is no “Level” of modding. It either IS modded or IS NOT, which is what this thread is for.

how to spot - color and manufacturer specifics

Now let’s talk about recognizing said items.
There’s a few giveaways, the most obvious being that anything “Black-rarity” is hacked, period. The Black color is due to a rarity not being specified, since rarity determines the color of the weapon.
(It can also be caused by having the “special” part of an additional gun placed in a location it’s not supposed to (e.g. second legendary barrel in the accessory slot).
Something about “Legendary part + Legendary part in the wrong place” makes the game color the weapon as black.)
Weapons literally cannot spawn without this field filled in, and in fact, if you try to log out with a Black weapon anywhere but in the bank, the game will delete it, due to error checking.

(Also, a Black Item in world)
A modder can force the “None” code to be used on gun parts other than sights; e.g. if used on the barrel, the barrel of the gun will not exist. If used on Norfleet’s element, the game will try its best to compute this nonsensical code so it will substitute it with explosive damage instead. 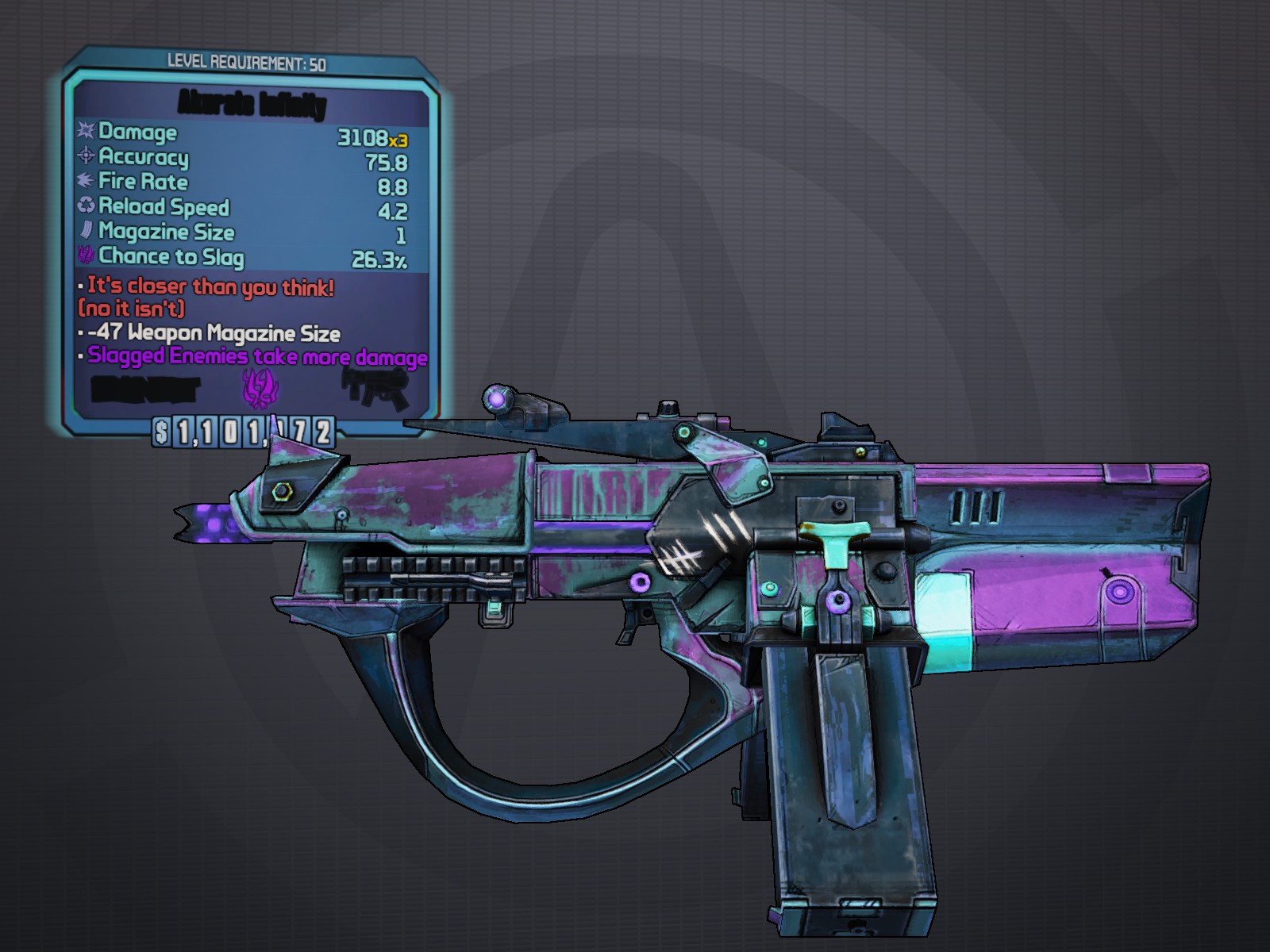 And with guns losing a bit of their base damage to deal elemental damage, modders like to make things like that because then you will have an RL that you can use on anything and that has a higher base damage.

Changing the sight would make the gun “Constructed”. Removing it makes it modded. Since removing the sight also removes the movement speed penalty of ADS, yes, you are gaining advantage through illegitimate means. That makes it a modded weapon, regardless of how severe it is.

Guns with weird colors (Abnormally white) are just guns with no “Material” assigned. In other words, the modder used the “None” code where the code for “Material” should be. 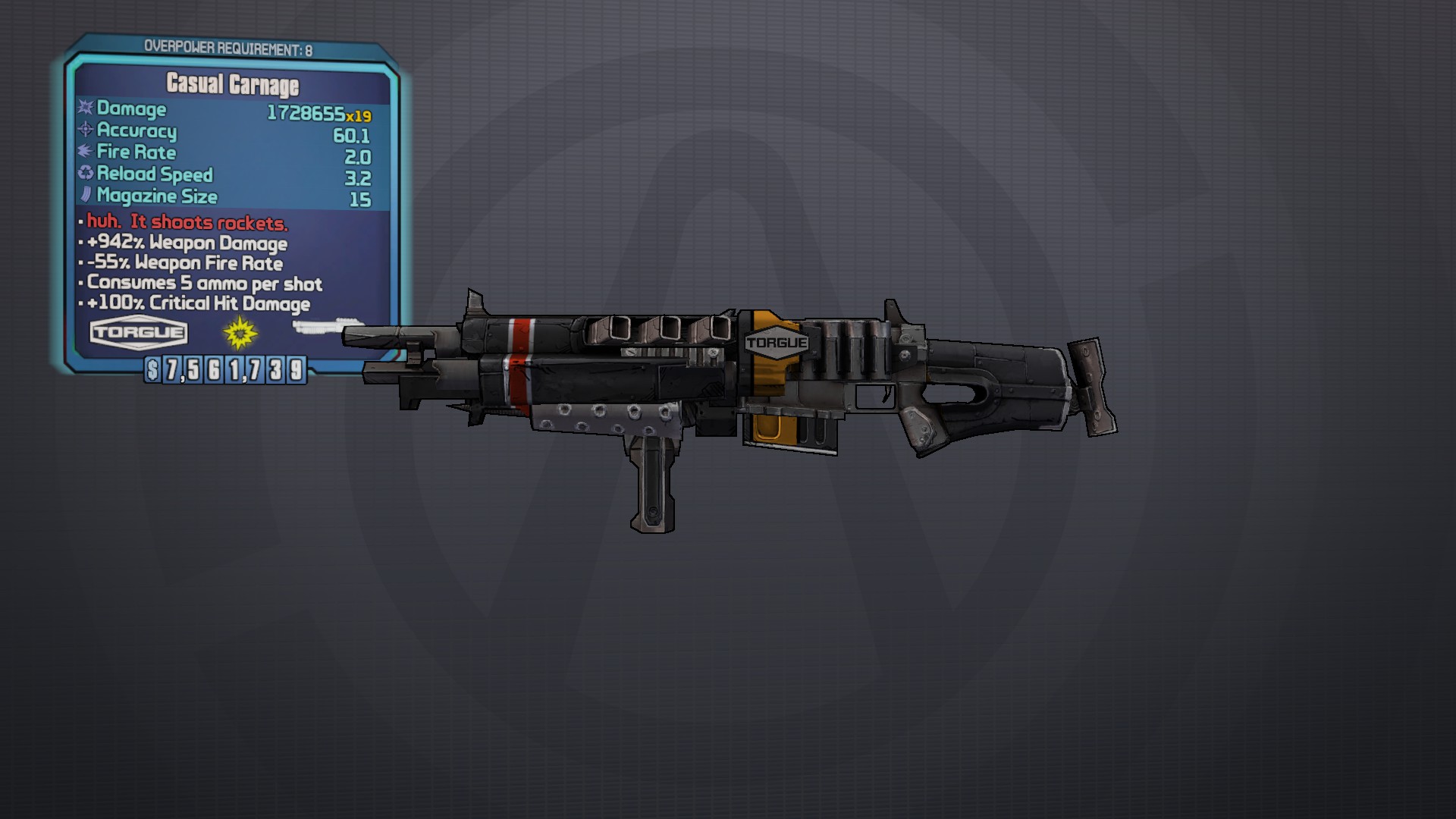 Beyond that, mostly it’s just remembering the rules that each weapon manufacturer keeps to:

Jakobs guns never have an element, except for three uniques (Stinkpot, Greed, and Twister)
(There are only four elements and explosive isn’t one of them.)

The only weapons which are explosive are Rocket Launchers, Rocket- and Grenade-styled Assault Rifles, the Cobra, and Torgue-brand weapons.

All Torgue weapons are explosive. They do not come in any element. (Explosive is no longer an element, despite what Jack says)

Maliwan weapons always have an element. The only Non-elemental Maliwan is the E-GUN laser from BLTPS. And it’s the only one in all BL Series.

All Moxxi weapons (anything with her name or logo physically on the gun) are elemental, except for the Creamer (an explosive Torgue rocket launcher).

All E-Techs spawn with an element, except the Tediore Omen shotgun [DLC4], the Maliwan Florentine SMG (deals both slag and shock) [DLC4] and some variants of Hyperion Darts and/or Spikers [vainilla game].

The “Harpoon” from DLC3 (or a Boom that shoots harpoons) and the ERROR MESSAGE ERROR MESSAGE from DLC1 are both behind-the-scenes weapons that are never meant to actually be seen or used by the player. All offered on trades are obtained in a non legit way. 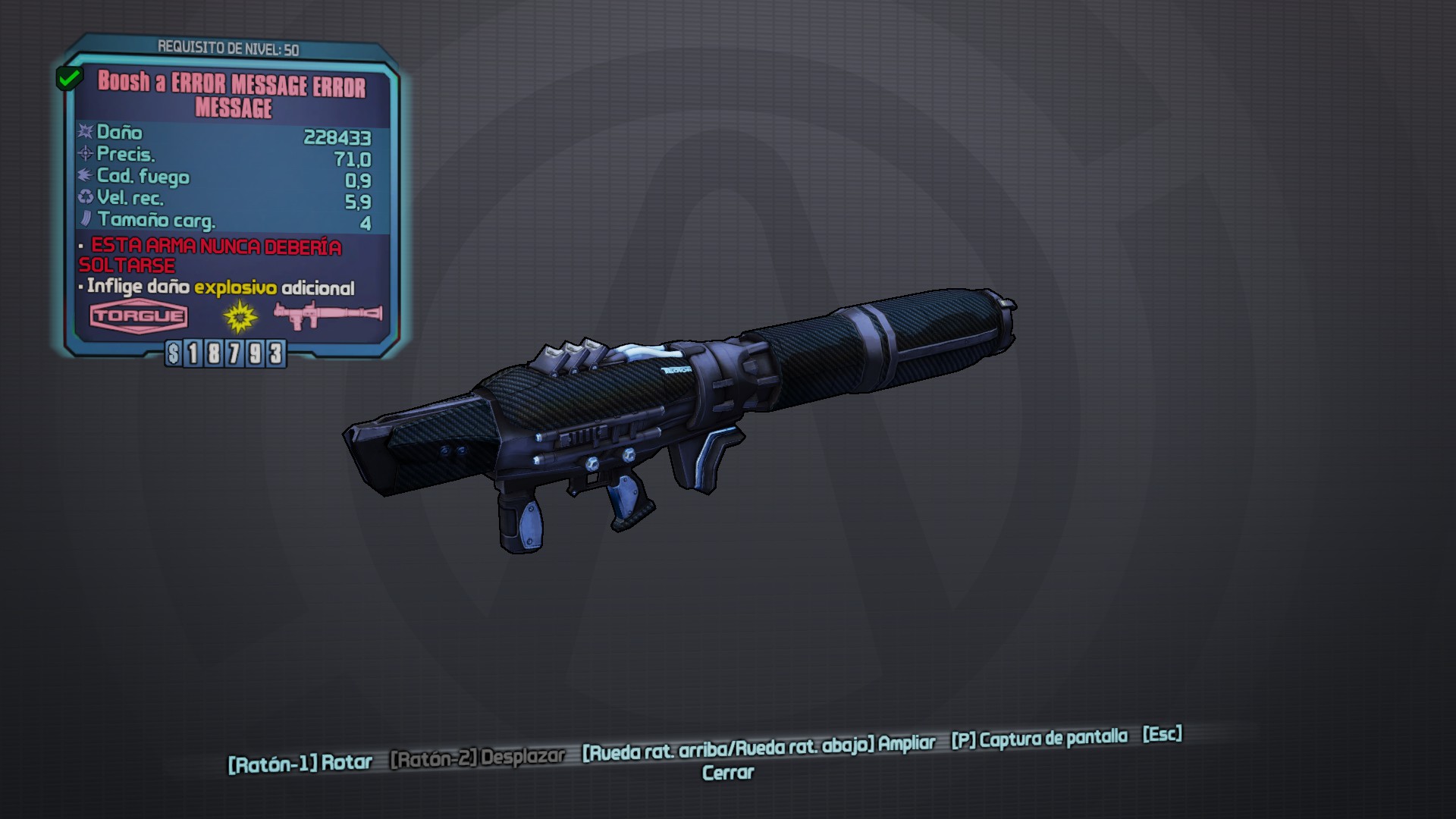 -The only E-Tech that Torgue manufactures is the SWORDSPLOSION!! from DLC4 [TTAoDK] 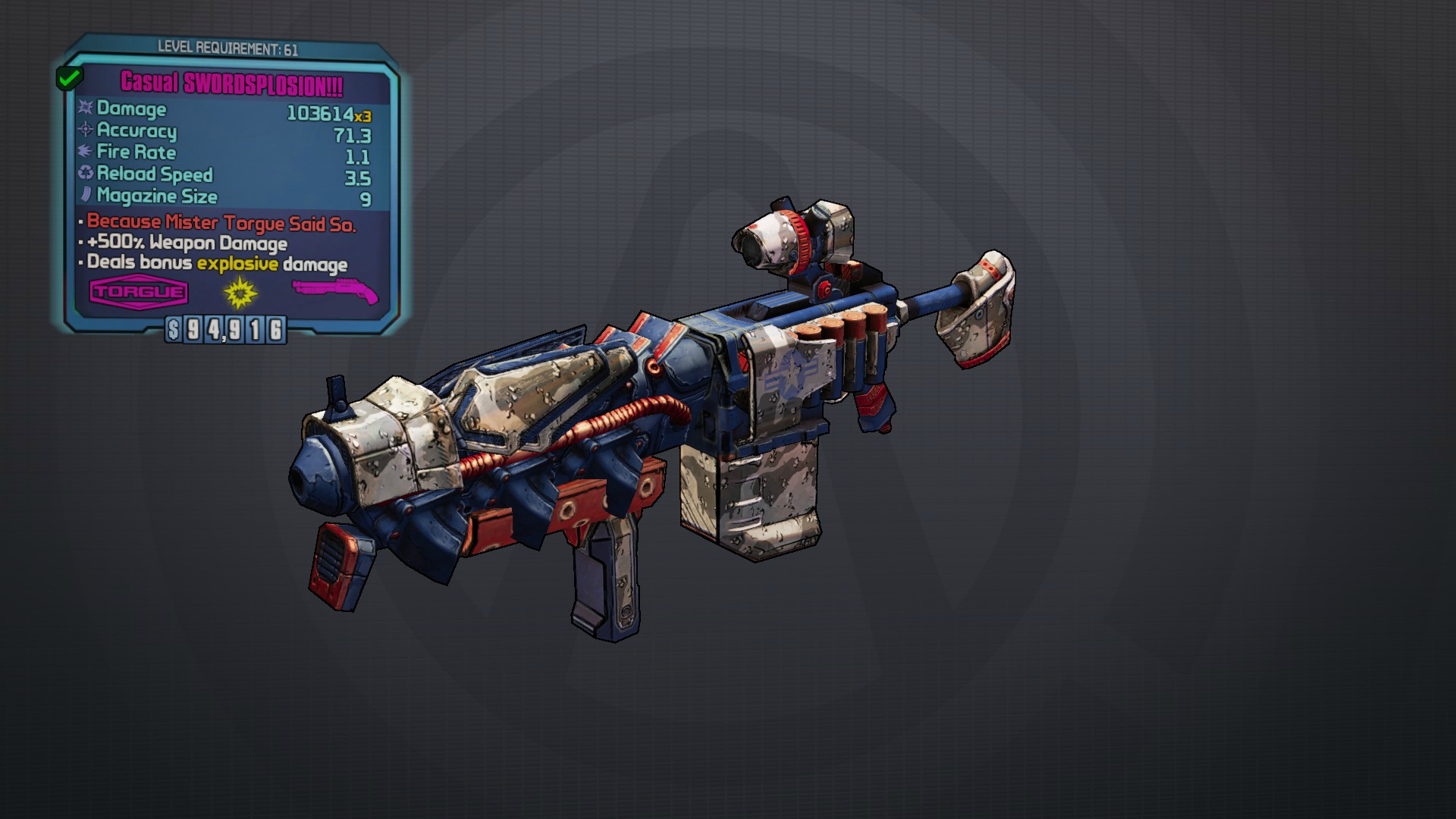 Weapons with a rarity of Purple or higher have to have an accessory, so any Legendary that doesn’t have a prefix is modded. (Rapid Infinity being the exception to the rule)
Weapons without manufacturers are modded. (The Infinity is one of the only weapons where that would work. On weapons, the brand determines reload animation. No brand (or a brand that doesn’t make that gun), no reload animation. But since the Infinity never reloads…)
And speaking of the devil; Slag Infinities are modded.

That Cobra you just got in a trade? They have dropped, but only a few though. Since the chance was raised, they are more common to see, but still a rarity.

The shield simply called Blast proof is also modded.
All it is is a Fabled Tortoise without the “Accessory” slot filled in. Apparently the capacity boost is part of the shield’s rarity, but the slow effect is not.
Funnily enough, a similar exploit with the Hoplite does not exist. All that happens is you get a shield with no body that STILL slows you down + raises the capacity for how many people are wearing it (including you).

Then there is also the impossible combinations of traits and parts.
Sometimes they even have the wrong manufacturer.
381

Keep in mind that on shields, the manufacturer is a completely irrelevant setting. It doesn’t grant any bonuses and the game doesn’t error check it.

Here is an example of a gun with the elemental part removed: There is no physical piece visually missing. The Elemental Capacitor is sometimes really obvious like for sniper rifles and ARs. For most guns, it’s just some fancy glowing colours like a corrosive Norfleet will glow green in some places.

Gun with the sight removed:
66

Grenade with the fuse removed:
66

Gun with mismatched prefix and attachment, the correct prefix for Maliwan bladed weapons is Evisceration:
51

A non-elemental Maliwan SMG. Sure enough, the prefix on it is “Technetronic”
32
Works and fires like a normal SMG, survives relog [patch v1.6.0] too. Of course why you’d want a “plain bullets” Maliwan SMG is beyond me.

Now, here’s another common hack done to Maliwan weapons: removing the element to produce an explosive effect.
22
This too will survive relog. Note the “deals bonus elemental damage”, despite there not being an element. Oh yes, and it IS explosive, despite the lack of an explosive icon.

And then you have the ones where error checking KIND OF catches it.
Here’s a Maliwan SMG with the Pimpernel’s special barrel bolted onto it. The game can’t render a sniper barrel correctly on an SMG, so it winds up looking like this:
Imgur 49
Quite obviously missing the main barrel portion of the weapon. It will still fire though, and yes it does produce the Pimpernel bomblet scatter with each shot. Also note the “purple rarity weapon with red text”. Yet another way it gives away that its hacked.

Like I said though, error checking will KIND OF catch this weapon. It won’t delete it completely, but it will remove the invalid parts on relog, so you’re left with this:
16
That’s right, it’s so Impetuous it doesn’t need anything else. Just Impetuousness. Quite obviously broken.

Not all partial error checked weapons are this obvious. Some are missing parts which don’t alter the name. Still reasonably easy to spot though.

There is also guns/items that appear just as their in game loot/drop counterparts, but are actually created by someone.
In this scenario there is very few options, sometimes none, to tell.

“GD_Weap_Pistol.Sight.Pistol_Sight_None” is the code that tells the game “put iron sights here”.

“None” is the code that tells the game “Gun part for this does not exist. ERROR ERROR DOES NOT COMPUTE”. Only the Greed & Interfacer can naturally spawn with this for their sights.
This is also why forcibly removing sights via modding will produce the same ADS speed effect on the modded gun that only comes with them.

If that confused you;

“None” means that a gun part does not exist there.

*Maliwan SMGs were subject to a bug: anytime the game tries to generate (or even to process) a Blue Maliwan SMG, it’s rarity automatically gets bumped up to Purple. It didn’t change the parts; it just upgraded the rarity. Since Blue weapons can spawn without a Sight, Purple Maliwan SMGs can have no sight. It’s the only exception to the rule, though, and as I said: it was a bug. In fact, the only Blue Maliwan SMG in the game was Chulainn, but got patched [patch v1.7.0]

Another fun fact: The Good Touch and Bad Touch are listed as Rarity 3 (Blue) if you check, but still highlight as purple. Bizarre eh?

Question: does upgrading the rarity also upgrade the damage, or does the weapon still have the damage of a blue SMG?

A: The answer is, yes, they do get a damage bump. Here’s two otherwise-identical Maliwan SMGs: Blue / Purple.
You’ll note that the stats are identical, although the look is not. This is because when the game bumps the Maliwan SMG’s stats up to purple it doesn’t change the weapon’s skin to match.

Also of note is the fact that while the stats are identical, the part lists are not. Blue Maliwan SMGs can spawn with no sight and no accessory, whereas Purple Maliwan SMGs must have a sight and an accessory.

The fact that the material hasn’t changed makes it easy to tell which weapon is an Attempted Blue and which one is a Purple. This is important for determining legitimacy of a purple SMG; the fact that a purple has no sight and no accessory could lead people to dismiss it as modded, when in fact it’s just an Attempted Blue.
Look for the large diagonal stripe in front of the magazine; On an Attempted Blue, this stripe is blue, and on a Purple, the stripe is white.

This also means that the Good Touch and Bad Touch are actually ending up stronger than they were supposed to. (and just for fun I’ve linked what all maliwan damage prefix good and bad touch should be like – images by lcbelgarath.)

Contributors:
Blut Fatal – Made me do this.
Bahroo – Info list on Sights & Sight_None + Grenade Ele-lists.
yukichigai – Half of the pictures, some of the text.
Loot Turtle – Impossible Gun Prefixes Guide.
swk3000 – Worded (and went in-depth on) the Maliwan color rarity bug.
All of the people mentioned above have also actively posted in this thread with great insight.

Uniques that always have sights:

Uniques that have the option to spawn with Sight_None: